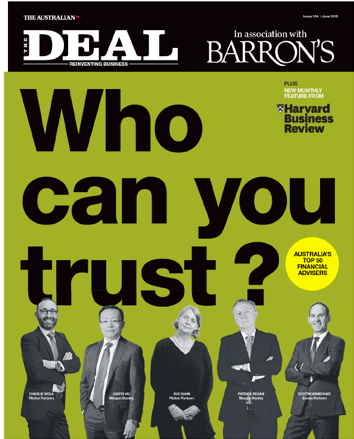 A New Exit Strategy: The Australian

The damning allegations levelled at some of the biggest names in the financial services sector during the banking royal commission have complicated life for the broader financial planning industry in more ways than one.

Beyond the broader reputational hit to the sector and the increased challenge of building trust with clients, the scandals have exacerbated the longstanding conundrum facing smaller independent financial planners weighing up retirement.

Financial planners have typically had few exit options, with business owners normally looking to sell out to banks or larger corporates. But according to Gilkison Investments managing director Dean Gilkison, even before recent events at the royal commission, selling to the big boys was an exit option unpalatable for many.

Vending a business into the majors typically meant saying goodbye to a legacy built up over many years. The brands disappear, Gilkison says, as do the philosophies and values that characterise a firm.

Gilkison is now leading an effort to create an alternative exit path. He has established Broadleaf Group with the specific aim of delivering an exit to smaller independent advisory firms while also preserving the legacies of the old businesses.

The Broadleaf model focuses on acquiring financial advisory firms with aligned values, and helps facilitate the transition from the incumbent owners to younger advisers who don’t yet have the capital to buy out their bosses.

Broadleaf also aims to differentiate itself from the majors by allowing the existing owners to decide whether to stay involved after their exit as either directors or mentors. That option holds a lot of appeal to business owners not yet ready to completely exit the workforce, or who fear that full retirement means death.

The model also aims to deliver the firm’s employees a path towards significant ownership, an option that often disappears when firms are sold to bigger players.

Gilkison says the idea for Broadleaf was inspired by the all-too-many peers who had come to regret the way they exited their companies.

“We’ve watched great colleagues of ours in the industry go through this struggle, and we’ve seen great employees locked out of any material participation of ownership in the business they’re working in,” he says.

While the reputation of financial advisers has taken a battering, Gilkison says most in the industry are genuinely concerned about the future of their clients. Many have built up relationships with their clients that span decades. Gilkison says the Broadleaf model offers to provide peace of mind to exiting owners that they will still be able to keep an eye out for their old clients’ interests.

It’s a model he and fellow Broadleaf director Richard Hernan are starting to roll out in their home town of Perth, and that they ultimately plan to take national. The firm’s first acquisition is due to settle in July, with another three already in the pipeline.

Hernan says while the business idea was in train before the royal commission began, the negative publicity from the commission had actually proved helpful.

“In our conversations with people we used to have to explain why they wouldn’t want their business to go to the big banks or AMP,” he said. “Now we don’t. They just have to pick up a newspaper.”